Apple has just announced the new version of its very popular operating system for iPhone and iPod Touch. That is iOS 13. (Sorry, we are not going to mention the iPad because Apple released a separate operating system iPadOS for the iPads only. Check our previous post about how one can install iPadOS on the supported iPad model.) A number of improvements are under the hood, but many new features are also introduced in this version.

We are going to provide a wrap-up of the new features to let our users know what are the main differences between iOS 12 and iOS 13. What is changed in this version? And what are those tempting things which will make your mind to upgrade your iPhone to this next big iOS 13 release? 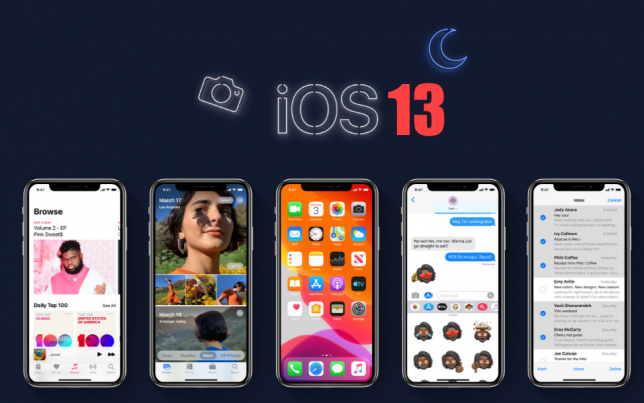 You can also read what the new features were added to iOS 12 at the time of its release and then compare what is changed in this new version.

The compatible iPhone models are as follows:

If you are holding one of these devices, you can update your iPhone to the latest iOS 13.

With the release of every major iOS version, Apple introduces more than 100 plus new features in the iOS operating system. This year is not different from the previous ones.

If you are still reluctant to decide whether you should go for the iOS 13 update or keep the existing iOS 12 on your device, read the following new 100 Plus changes found in iOS 13.

Without going into the details, here we are giving you the complete list of features introduced in iOS 13. 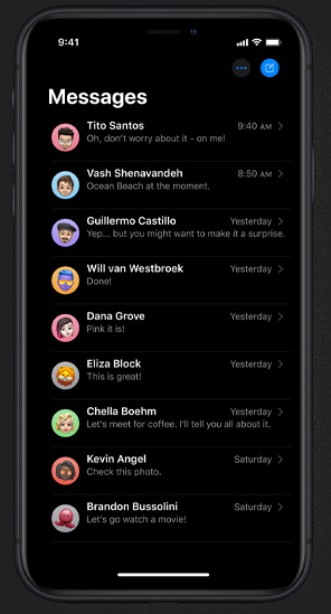 3. A new button for Dark Mode is included in Control Center.
4. All the built-in apps and settings support Dark mode.
5. The wallpapers automatically change when you switch between dark and light modes.
6. API for third party apps is introduced. It means it is coming to Facebook, Twitter, WhatsApp, Instagram, and other popular apps.
7. Photos tab in the Photos app is totally overhauled.
8. Photo previews in Days, Months, and Years are now larger.
9. Photos in previews are now uncropped.
10. Duplicate photos, screenshots, documents are automatically hidden in the Photos tab.
11. The Photos tab displays the name of the location, holiday, or concert performer.
12. If you assign birthday to people in People album, the Photos tab will highlight the photos when the birthday of your friends and family members comes.
13. Screen recordings are now in a separate album.
14. Music for Memory movies is extracted from the Music app.
15. While editing the app, each edit displays its intensity.
16. You can not control the intensity of the filter in the Photos app.
17. You can check the individual photo effect before and after applying it.
18. In the Photos tab, live photos and videos will start auto-playing when you scroll down.
19. Animations and transitions keep your place in the Photos tab.
20. Months presents your photos by events.
21. “One this day” shows the photos taken on the same day in past years.
22. You can zoom in and zoom out the Photos library.
23. Photos are now searchable using the multiple search terms.
24. Next live photo will automatically play if the next live photo is taken within the next 1.5 seconds.
25. Enhance will automatically change the intensity of all the filters.
26. Now you can edit videos in the Photos app. 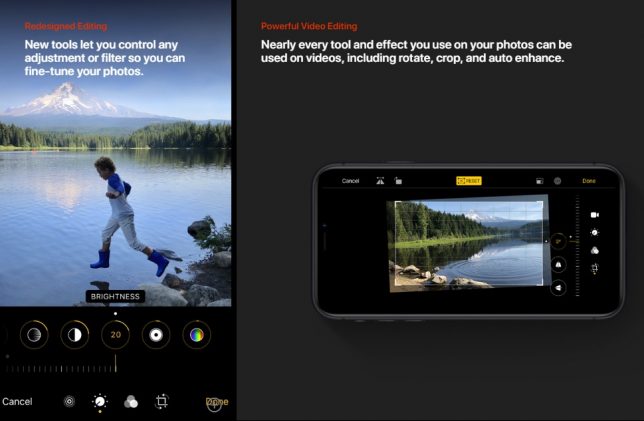 27. You can apply adjustments, filters, and cropping to the videos.
28. Videos can now be rotated.
29. Video edits are now reversible just like photos.
30. A new Vibrance adjustment is included.
31. White balance to adjust the warmth of an image is included.
32. Sharpen slider changes the photos by making edges crisper and better defined.
33. Definition slider is now present.
34. Noise reduction feature for photos is added.
35. Vignette feature is added.
36. Pinch to Zoom option while editing the photos is added.
37. You can now adjust portrait lighting intensity in the camera app.
38. A new Portrait lightning effect, High Key Mono, is added.
39. You can now let an app to use your location either once or anytime.
40. You can now receive a notification whenever an app uses the location in the background.
41. WiFi and Bluetooth devices won’t be able to use your location without proper permission.
42. You can not include or exclude your location while sharing a photo on social media.
43. Sign in to apps and websites using the Apple ID is now supported.
44. Apple ID sign-in will share only your name and email address.
45. You can also hide or show the email while using Apple ID sign-in.
46. You can also create a dummy email which will forward all the information to your real email. You can delete this fake email any time.
47. Apple ID sign-in works with all platforms whether you are using android, windows, iOS or macOS.
48. HomeKit enabled cameras store recorded clips in iCloud.
49. Routers can also use HomeKit API.
50. Siri shortcuts cannot be added to automation.
51. Home app more accessory controls.
52. The maps app is redesigned. 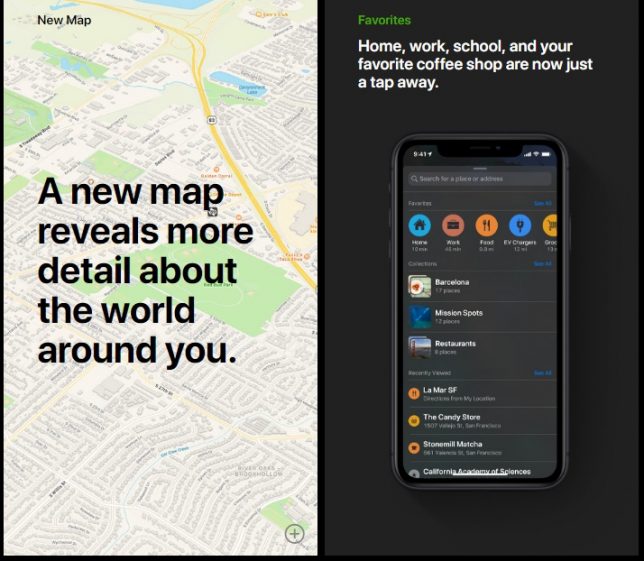 53. Look Around feature, which is similar to Google street view, is added to Apple Maps.
54. Make collections of your favorite places and share with others.
55. You can add frequently visited places to the Favourites.
56. Share your ETA with others using Maps.
57. Customer feedback option is redesigned.
58. Siri guidance is improved in maps.
59. Real-time information is available on the Maps.
60. You can now check flight status, gate location, departure and arrival times using Maps.
61. MapKit with Dark mode support is available for developers.
62. CarPlay is also updated to integrate new features of the Maps app.
63. Siri includes a new voice which is generated entirely by software.
64. Siri is more intelligent and offers personalized suggestions.
65. Sirikit for audio is available for developers. Siri can now play music, audiobooks, podcasts and radio in third-party apps.
66. Siri can now play your favorite radio station.
67. Siri also contains Indian English voice.
68. Shortcuts app is now built-in app.
69. Shortcuts are more powerful now.
70. You can choose whether you want to share your photo and name in the Messages app.
71. You can select an Animoji, image, or monogram for a photo in messages.
72. You can automatically create generate sticker packs.
73. Search option is messages is improved.
74. Detailed pane in messages is improved.
75. Memoji customizations are improved with many new editing tools. 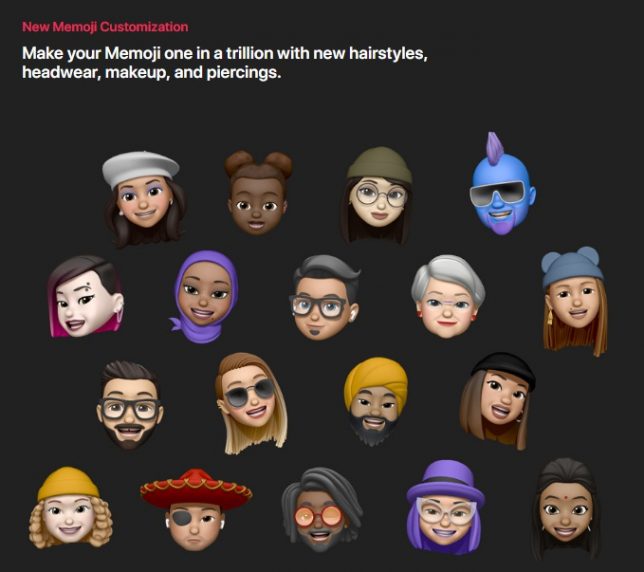 76. Three new Animoji characters, mouse, octopus and cow are added.
77. All iOS devices with A9 chip support Memoji and Animoji.
78. New relationship labels are added in the Contacts app.
79. You can create a new Memoji for yourself or for other contacts within the Contacts apps.
80. QuickPath feature is added to QuickType keyboard. You can type a word without lifting your finger. 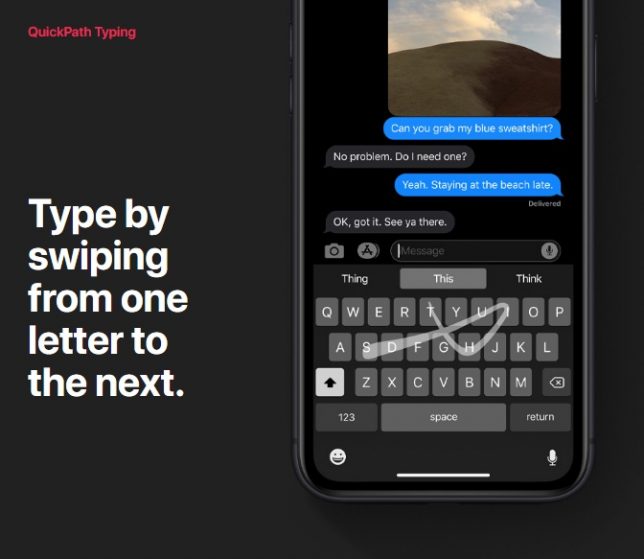 81. You can now swipe or tap to type.
82. Alternate word option is added to the predictive bar.
83. More language support is added to QuickPath.
84. Dictation will automatically detect the language.
85. Reminders app is redesigned.
86. New quick toolbar to add times, dates, locations, flags are introduced in Reminders app.
87. Photos, documents, scans, and even web links can be attached to your reminders.
88. Drag and drop reminders in grouped lists.
89. Messages app integration is added.
90. You can now customize the list appearance in reminders.
91. In CarPlay, Dashboard, Calendar app, Home screen, and Apple music are redesigned.
92. You can now enable Do Not Disturb while driving in CarPlay.
93. A light mode for easy-on-the-eyes is added.
94. The app launch is two times faster in iOS 13.
95. Apps will be 50 percent smaller in size in iOS 13.
96. App updates will be 60 percent smaller.
97. Apple Arcade feature is added to the App store. With Apple Arcade you can play over 100 games with a single purchase, and that is too without ads and additional app purchases.
98. You can now download large apps and games over a data connection.
99. In the mails app, you can block the sender across all devices.
100. You can mute a thread in emails.
101. Desktop-like text formatting is added in mails app.
102. All system and acquired fonts are supported.

We are still updating this list with more and more features. Come back later for more hidden and secret iOS 13 features which are still unknown to you.