Extracted from the confidential slides sent to few developers in an email related to upcoming features of Windows Phone 8.1, here is the screenshot of Action Center, also known as Notification Center in other operating systems like android and iOS.  Honestly, the first look at the image reminds me the Notification Center of an android phone.

Update: Microsoft has finally announced Windows Phone 8.1 and there it has got Action Center as we told you in this post. You can read more about it and about other feature in our Windows Phone 8.1 Features Post.

If you look closely at the picture, all the settings, pattern and even the layout is similar to android’s Notification center. The only change I see is the name that is dubbed “Action Center” in WP 8.1 version.

The first image shows the half-open Notification Center. When you swipe it down from the edge, it first shows the toggles at the top and a small link to all settings. The half-open Action Center gives you quick access to commonly used switches. You can enable / disable different options like Wifi, Bluetooth, AirPlane mode and Driving mode by using few taps without going into deep settings. 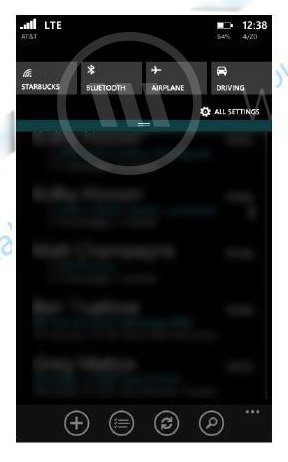 When you further pull it down, all the other notifications appear stacked according to application and time. At this stage, you’ll also see the “Clear All” option at top of the notifications. If you tap on it, all alerts will wipe off. 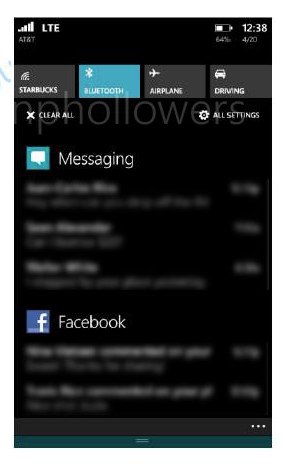 Another feature, which I think is absent in other platforms, is that it gives more control to developers to manage the alerts intelligently as per app basis. They can silently add the alerts, update them and even delete them without disturbing the user. I think it means if  a notification is not important to the user, it will automatically be deleted from the Center after a specific time. 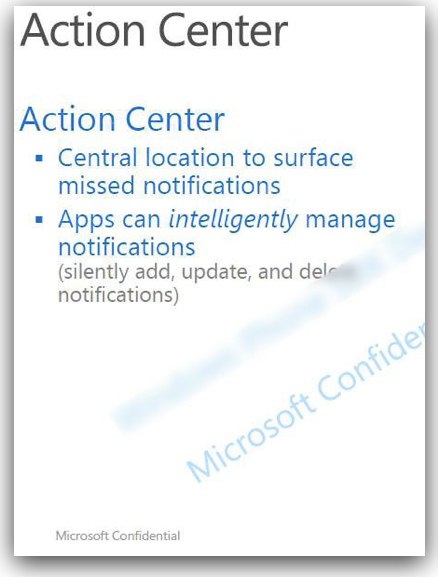 Besides the above mentioned information, the slide also shows the next update, which is expected on April 2 during Build Conference, is named as Blue officially. The developer preview of WP 8.1 will also be announced on the same day, the download links of which will be provided to developers later.

You can follow us on Twitter, Google+ or join our Facebook fanpage to keep yourself updated on all the latest tips and tricks about Microsoft and Windows Phone 8.1.