Another good news that has come out of the MIX 2011 is that Angry Birds for Windows Phone 7 will be available for download starting May 25 as Microsoft had promised earlier in the year.This was one piece of news for which Windows Phone 7 users were anxiously waiting for. Angry Birds is the biggest gaming phenomenon on smartphones and has conquered every platform due to its unique physics oriented nature and addictive gameplay. 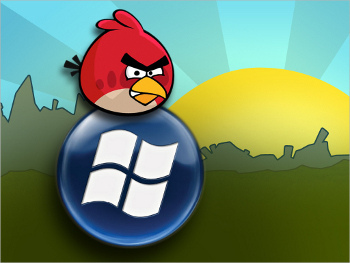 This is great news for the Windows Phone 7 platform because Angry Birds is one of the most popular smartphone game nowadays and was recently adopted by Google’s Android as well, so this signals that the Windows Phone platform is catching momentum. An updated version of Windows Phone, codenamed “Mango”, is on the cards and would be released in the second half of 2011. Key changes would be  improved multitasking and faster load and resume time for games such as Angry Birds.

The Windows marketplace  has over 8,000 applications more than 30,000 registered developers so Angry birds would make a nice little addition in the Appstore.

Downloads for the game would be available at the Windows Phone 7 Marketplace starting May 25.