Last Friday Apple released a security update for all of its Mac users to prevent the Flashback malware from doing any harm to the  Mac machines.  Today Apple offered a separate Flashback malware removal tool the main purpose of which is to kick the malware out of the Macs all together. 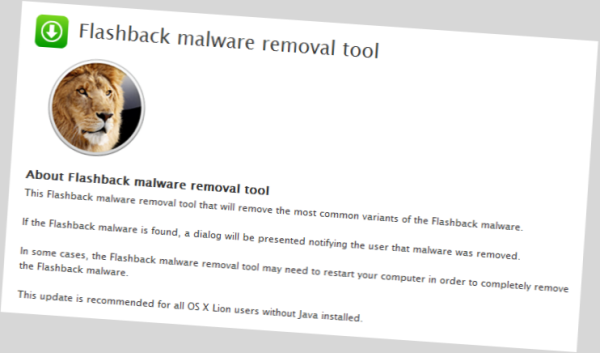 According to a report more than 660,000 Mac OS based computers were infected by this trojan. Apple’s security patch prevents the trojan from doing any harm to the host computer but if you want to remove the malware completely or you didn’t install the java, you are recommended to run this new tool on your Mac books.

Apparently, this Flashback initiates the click fraud scam by hijacking people’s browsing history and terms. But it can also steam some secrete information like the financial credentials and credit card numbers.

Here is how you can remove the Flashback completely from your Mac:

Step 1: First of all launch the Apple’s software updater and install all the updates especially java update for Mac OS X lion and previous OS versions.

Step 3: Now go to this link and download the Flashback Malware removal tool.

Step 4: Run the tool. If it finds any such malware, it will notify you and will tell you that it has successfully removed it.

In some case this tool may ask you to restart the computer in order to eliminate the Flashback variant completely.