Today Apple has released the awaiting iOS 7.1.2 update for iPhone, iPad and iPod Touch devices which is available through both OTA and iTunes methods, but here are also direct download links for iPSW files in case you want to save the files for future use.

As you know this is not a major update, so we don’t expect any new changes in it. It fixes few bugs and improves the connectivity. The most important patch it includes is for email attachments’ encyrption. This bug was discovered few months back but soon we also found a solution for it in the form of a jailbreak tweak which is available through cydia store. Now Apple has finally patched the loophole in this release.

The third important fix, as we can read in the screenshot, is related to third party accessories including bar code scanners. If you are using any such third party accessory which is giving problem while connecting to the iPhone or stops working or doesn’t handle the data as you expect, it is time to install this update and get rid of the issue. 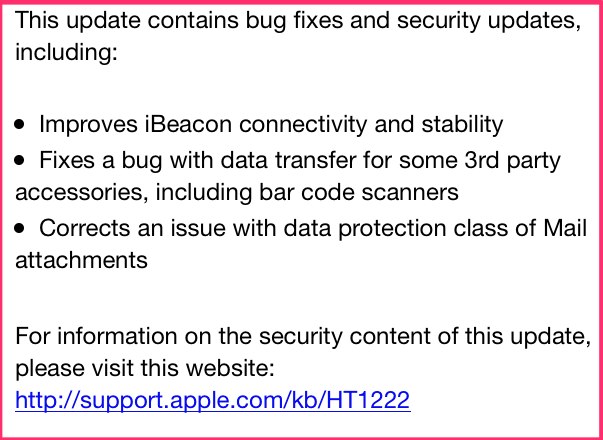 How to Get This Update:

There are three methods you can use to get iOS 7.1.2 on your phone. Either you can adopt the time-saving OTA (over the air) method or use iTunes method. The former method is easy as it doesn’t involve the requirement of PC. In this method, simply fire up “Settings” app, go to ‘General’ and then tap on ‘Software Update’. There you’ll see the update. The whole update is of 32 MB of size if you go through OTA method. It is also suitable for those users who want to install the update on cellular network and currently don’t have access to WiFi.

In other method you have to connect your iPhone/iPad with PC, launch iTunes and check for updates. The iTunes will show a pop up telling you there is new update available which you can download using iTunes. 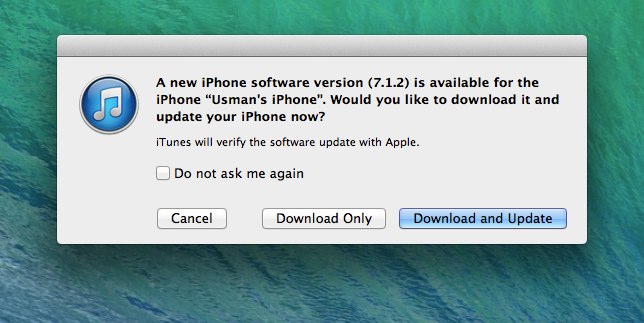 The third method, which is actually the fork of second method, also involves iTunes but it is more commonly. In this method you first download the iPSW file from Apple servers on your computer hard disk or on any other storage drive and later install on your device. Once downloaded and saved, you can re-use the same iOS 7.1.2 iPSW file again and again for the same device models. To go through this way, simply download iOS 7.1.2 from below mentioned direct links, attach your phone with PC, launch iTunes, keep pressed the “option/alt” button on mac or “shift” button on Windows and then click on “Update”. Now navigate to the downloaded iPSW file and select it.

Here are the direct download links for iOS 7.1.2 iPSW files.

The jailbreakers can safely update their devices to iOS 7.1.2 as it has been confirmed that Pangu 1.1 can also jailbreak iOS 7.1.2.