Apple TV is announced to be released late September and it is widely rumored that this next generation Apple TV will be running on the same iOS which is installed on iPhone and iPod. Though the images shown by Steve Jobs in Apple’s annual media event indicate that this version of Apple TV will be identical to previous models, but a new entry found in iOS 4.2 beta has confirmed that this time it will be powered with iOS.

It is to remind you that the same entry in previous versions of iOS was mentioned as iProd2,1 and it was believed that it would be an early prototype of next-gen iPad. However, this entry with same ID is now attached with Apple TV, referring to a new operating system for Apple TV. 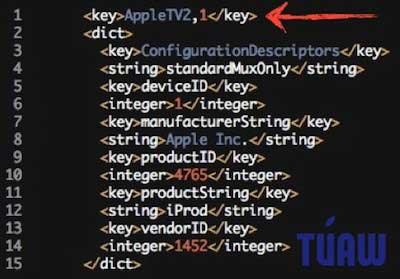 If all this is true then we can expect that Apple TV will run on solid iOS version instead of minimized one and a simple jailbreak may make it possible to run the iPhone and iPad apps on it if Apple doesn’t allow us to do so.