We already shared some pictures and a video of next-generation secret iPhone (4G) posted by Gizmodo in our previous post. Apple now officially demands from Brian Lam, the chief editor of Gizmodo, to return the secret iPhone which was lost in a bar.

Here is the letter from Apple which is written to Brian Lam: 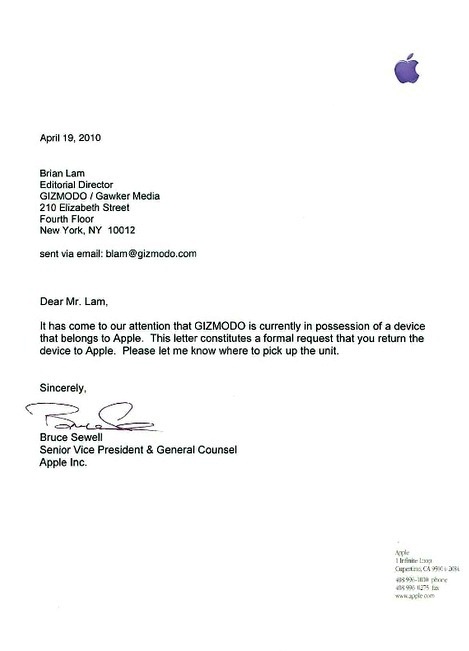 And here is the reply from Brian Lam:

Bruce, thanks.
Here’s Jason Chen, who has the iPhone. And here’s his address. You two should coordinate a time.

Happy to have you pick this thing up. Was burning a hole in our pockets. Just so you know, we didn’t know this was stolen [as they might have claimed. meaning, real and truly from Apple. It was found, and to be of unproven origin] when we bought it. Now that we definitely know it’s not some knockoff, and it really is Apple’s, I’m happy to see it returned to its rightful owner.

P.S. I hope you take it easy on the kid who lost it. I don’t think he loves anything more than Apple.

So the whole story confirms that Apple is going to release a next generation iPhone soon.