The Verge published the story about BlackBerry London which is rumored to be the first phone running on BBX OS. According to the source the image sent to them seems to be a picture of a dummy phone. The actual device is still under development. 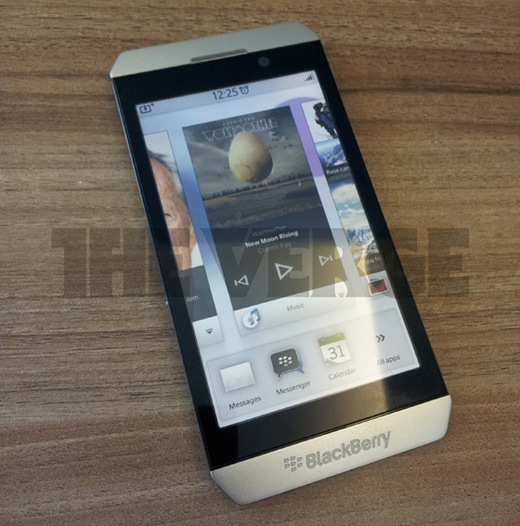 The phone you see in the picture above is apparently dubbed the BlackBerry “London,” and is said to be headed for a June 2012 release. The phone allegedly is equipped with a TI OMAP dual-core CPU clocked to 1.5GHz, 1GB of RAM, 16GB of onboard storage, an 8-megapixel rear camera, and a 2-megapixel front-facing shooter. The London is reportedly “thinner than the iPhone 4” and roughly the same size as a Galaxy S II (though our source didn’t say which S II specifically). Oddly, the source says that the phone can be stood straight up on one of its sides (suggesting more boxiness than can be seen in the picture)

BlackBerry London features look very impressive when we compare them with the features of newly released Apple’s iPhone 4S. BB London has a larger screen size, more ram and more powerful processor than iPhone 4S. The company is planning to release it in the third quarter of 2012, which is around the same time the next generation Apple’s iPhone 5 will be launched.

Did we mention that it will be thinner than iPhone 4S? Well, if this is true then we can expect that iPhone 5 ( or iPhone 6, we don’t know now what will be name of next generation iPhone) will also be a thinner device than the current version of iPhone. Lets see how Apple competes with its competitors.