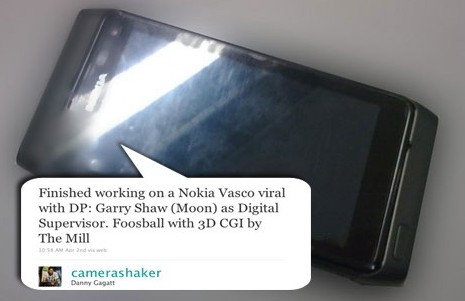 When Nokia adopted the new strategy of naming the Nokia mobile phone models, there were rumours that Nokia would be going to release a new N8 phone soon. It has been confirmed now by different sources.

According to the tweet posted by a cameraman Danny Gagatt, a viral video of Nokia N8 is coming soon. The codename of this new phone will be “VASCO“.

This phone will the most powerful by Nokia based on latest Symbian operating system Symbian^3. Some specifications of N8 has already been leaked. It will come with 12 megapixel camera with a capacitive multitouch 3.5 inch display.

There are also reports that the browser of this phone is rewritten completely and is based on Qt.

Latest Edit: The tweet is not available now because Danny has protected his tweets.