Many Windows users are reporting a strange problem whenever they try to install Yalu iOS 10 jailbreak on iPhone and other iDevices using Cydia Impactor. To be precise, they are getting http-win.cpp:158 error.

This type of error occurs when the software can not connect securely to the remote servers while using the current SSL certificate.

Here is the exact error Cydia Impactor was throwing while trying to install Yalu or any other IPA files.

Fortunately, Mac users were not affected by this problem. They could use it without any issue.

Here is a good news for Windows users.

Saurik has released a new version of this tool which now includes the fix for this problem. 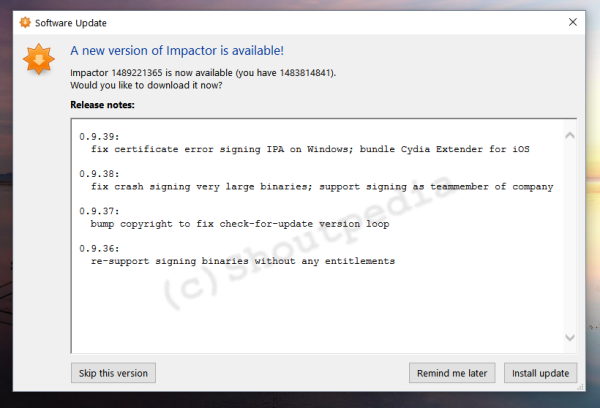 Now you don’t need to install Mac using VMware virtual machine or borrow a MacBook from a friend for this purpose.

All you have to do is to install the latest version.

If you have already downloaded any previous version of Cydia Impactor, open it and then use the built-in Update checker to get the direct download link for the latest version.

Alternatively, the latest version of Cydia Impactor can also be downloaded from the official site to fix 158 SSL Certificate error.

Cydia Extender is an advanced feature which is useful for those who have got developer certificate.

Except for SSL certificate fix and Cydia Extender for developers, there is no any new feature in this latest release.

The method to use Cydia Impactor v0.9.39 is same as we have already covered in our previous post.

Here are some topics related to Cydia Impactor which you may find helpful.

PS: Some users are getting http.hpp:33 -assert (code ==200) error even with release. This error message is received when a user drags and drops the IPA file onto Cydia Impactor. If you are also facing this issue, you can use Device > Install Package route to sideload the IPA files including Yalu.

If this latest Cydia Impactor release fixed your above-mentioned issue, please leave a confirmatory comment below.