iOS 4.2 Public Version release date is coming closer and closer and according to a post on 9to5mac iOS 4.2 will be released on November 9th or Nov 12th. It is the first iOS release that will support all idevices i.e., iPad, iPhone and iPod Touch.

Today Apple sent out another email to all developers reminding them to make their apps compatible with iOS 4.2 before the release of iOS 4.2. 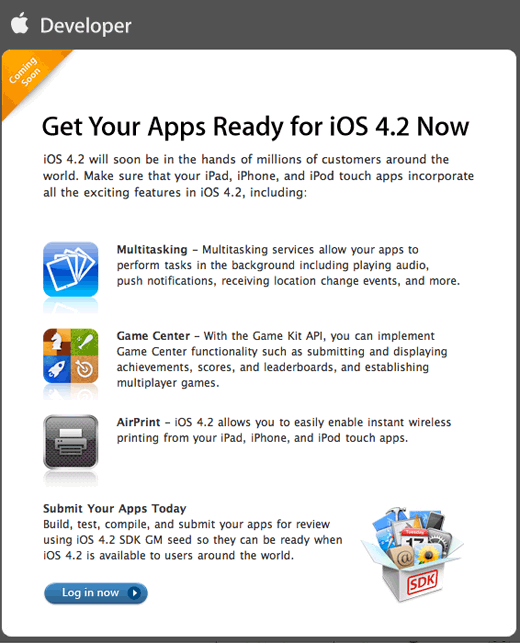 iOS 4.2 will soon be in the hands of millions of customers around the world. Make sure that your iPad, iPhone, and iPod touch apps incorporate all the exciting features in iOS 4.2, including:

Game Center – With the Game Kit API, you can implement Game Center functionality such as submitting and displaying achievements, scores, and leaderboards, and establishing multiplayer games.

Build, test, compile, and submit your apps for review using iOS 4.2 SDK GM seed so they can be ready when iOS 4.2 is available to users around the world.

On the other side if you want to keep enjoying the untethered jailbreak on iOS 4.2, it is highly recommended that you save the SHSH blobs for iOS 4.1 before Apple stops signing the iOS 4.1.