After many beta releases finally the first public build of biteSMS 8.0 is now available. It supports all major iOS versions including the latest one iOS 7 / iOS 7.0.5 and almost all iOS devices including iPhone 5S.

If you don’t know, biteSMS is one of the best alternative of stock messaging app. It has got few highly demanding features which are absent in the native counterpart.

Apple doesn’t allow any app which modifies or adds some features to the stock messaging. However, you can install alternative apps from app store or you have to jailbreak your device in order to incorporate the new feature into existing modules. biteSMS gives you a whole new feature-rich experience bringing for you all those qualities which are missing in the official app. 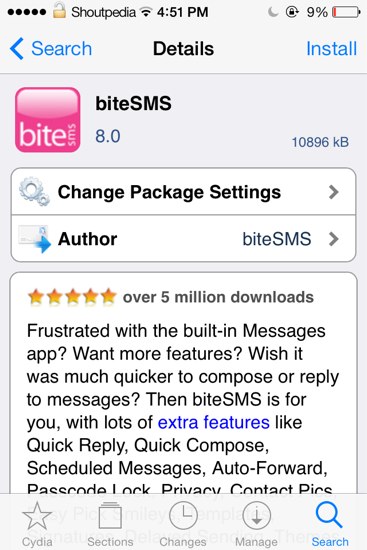 With biteSMS you can quickly reply to an SMS, get the delivery reports and even schedule the messages to be sent later at the set time and date. This app truly deserves to be included in that list of applications for which many users jailbreak their devices.

If you have already jailbroken your iPhone 5S, 5c, 4S, 4 etc, you should give it a try. It is totally free of cost available under BigBoss repo. It gives you 7 days ads-free experience, after which you’ll see a small banner under the app. But you can remove this banner too and get the life-time updates from Delicious Inc. after paying $7.99 for one time. 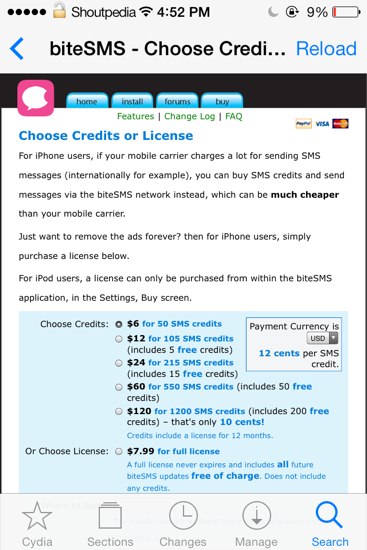 Along with the public build, there is also biteSMS 8.1 beta release available for download under non-default repo. You have to add http://test-cydia.bitesms.com repo in order to download the beta version.

If you are already using this app on your iPhone, please share your experience with our reader.