FireFox 6.0 Beta is now available for download on your Windows, Mac and Android devices. Though this version is under testing and may contain some bugs, but it includes a lot of new features and enhancements. 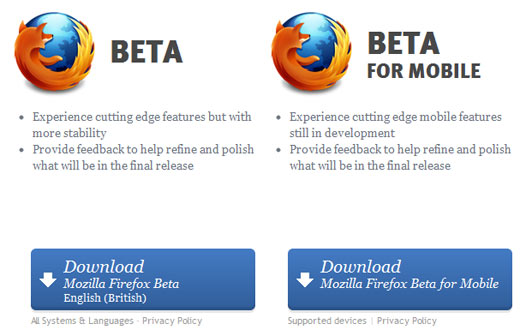 Firefox is one of the best browsers which is very popular among internet users and developers due to its speed, available add-ons, security and other functions.

According to the release notes, Firefox 6.0 beta brings the following new changes:

You can get the beta version of Firefox 6.0 for both Desktop and Mobile environments from this Mozilla’s official page.

Please note that when the beta version of Firefox 6.0 is installed on your existing stable Firefox version, it will overwrite your existing installation. However, you won’t loose anything like bookmarks, browsing history etc but some of add-ons might not work properly in this beta release.

You can remove Firefox Beta 6.0 just like you remove any other program from Windows and Mac. Removing beta version doesn’t remove your personal preferences like bookmarks, history etc.