Apple has just released iOS 5 beta 3 for developers which is supposed to bring some improvements and bug fixes present in iOS 5 beta 2. Apart from iOS 5, iTunes 10.5 beta 3 is also now available for download. 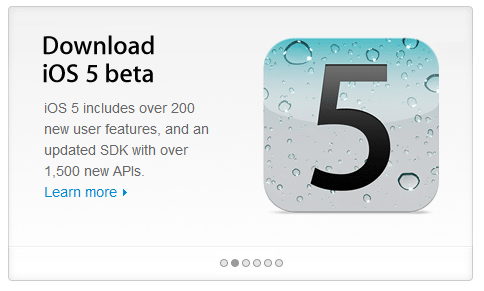 All those members who are officially registered with Apple Developer program can download this release. The download links can be found at the bottom of this post. Here is the full changelog if you are interested to know what is changed in beta 3.

AirPlay
Apple TV
Audio
Calendar
GameKit
GameCenter
iBooks
iCloud Backup
iCloud Storage
iMessage
iTunes
MMS
Photo Adjustments
Reminders
FIXED: The Reminders application does not send notifications for reminders that are based upon the entry (and/or exit) of a location if there is no date associated with the reminder.
Settings
Simulator
Springboard
Twitter
UI Automation
UIKit
WebKit
WiFi Syncing
Xcode

We are uploading these releases and unofficial download links will be available soon for everyone. Please check back later. Until we upload all files on some free hosting servers, you can download them from here.