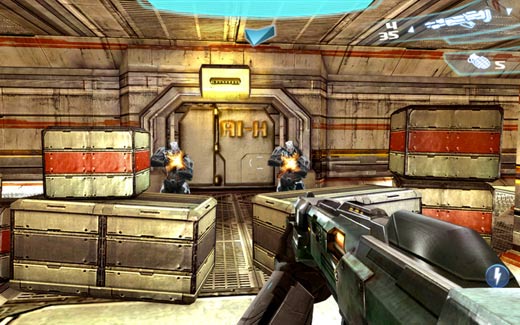 N.O.V.A 2 was originally developed for iOS devices i.e., iPhone and iPod Touch devices but the same is re-written for mac users. It is available from Mac App Store for a small price tag of $9.99.

The description and features of NOVA 2 state:

6 years have passed since the events depicted in the first episode.
Humanity is now thrown into a bloody civil war fought on one side by the central government of the Terran Orbitals and the self-appointed Human-Alien Alliance; a new organization with a mysterious origin and agenda. Kal Wardin left active service in N.O.V.A. years ago and now lives among the colonists of the desert planet Scorpius.
But war never spares even the most peaceful places…

INTENSE MULTIPLAYER MODES:
– 1~10 players online or locally
– 5 modes: Free for All, Team Deathmatch, Capture the Flag, Freeze Tag, and InstaGib
– Ranking & perk systems
– 10 maps on which to battle it out
– Play against your friends or the entire world through Gameloft LIVE!
– Worldwide leaderboards in the game & on the official website, www.near-orbit-vanguard-alliance.com