Exactly thirty days ago we wrote about fake Absinthe 3.0 untethered iOS 6.0.1 jailbreak and today we are going to share with our readers about another untethered jailbreak which is called DreamJB.

The DreamJB website (dreamjb.com) is live now and according to which this jailbreak will be released on December 22nd. If it is really coming, we are very happy and we will definitely appreciate the efforts of the developers. 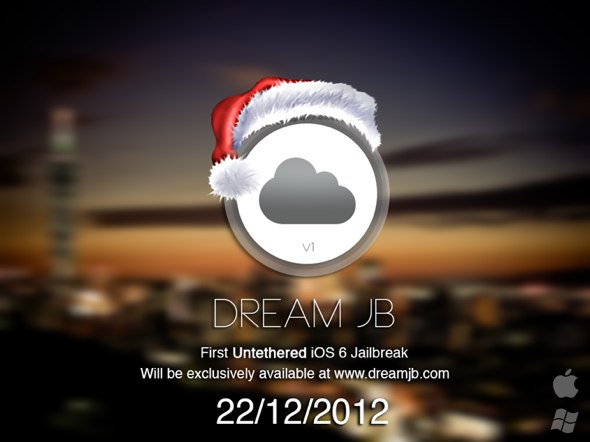 But the fact is that we have reservations about this jailbreak due to which we call it a fake jailbreak. And it is our duty to tell the jailbreak community why we and other renowned developers like @p0sixninja consider it a false attempt to gain popularity only.

The first and most important thing is why the developer is hiding his identity. Here is what DreamJB website tells about the developer:

Who are you? Where did you come from?

My identity will remain an obscurity. I am not affiliated with any known dev team. This project is individual and solely run by me alone. I am here to show the world that the source of an exploit or jailbreak can be from outside the norm.

The other question is if he is sincere with the jailbreak community then why he doesn’t share his exploit with other members of iPhone and Chronic Dev Team to release untethered iOS 6.1/iOS 6.0.1 jailbreak as soon as possible.

Just for a moment if we suppose that he wants to take the full credit of the jailbreak and that’s why he is not sharing his exploit, even then he should talk with other developers to satisfy them. In fact there are many way to show our knowledge without transferring the actual knowledge. But in this particular case the unknown developer is insisting on having a untethered iOS 6 exploit instead of showing something convincing.

No matter how many times we say “They’re all fake” no one ever listens….. sigh

And here is the reply of @p0sixninja to Mr. DuNh1ll, who, I think, is the developer of DreamJB.

Joshua Hill: @Mr_DuNh1ll naw, I’d rather wait for your ETA to come and go so everything can laugh. the more fake jailbreaks, the less I want to work

What do you think about this new jailbreak??