Everyone was expecting the final release of Evasi0n jailbreak this Sunday but it couldn’t happen so due to the extensive testing. Now Evad3rs team has officially announced that they will release it tomorrow.

The jailbreak for iOS 6.1 is in final testing and preparation phase now. According to the official twitter handle the count down has begun now.

Final count down toward tomorrow’s release has begun!

Moreover, evasi0n website has also been updated which is now showing 91% completion. The next step is “Release”. 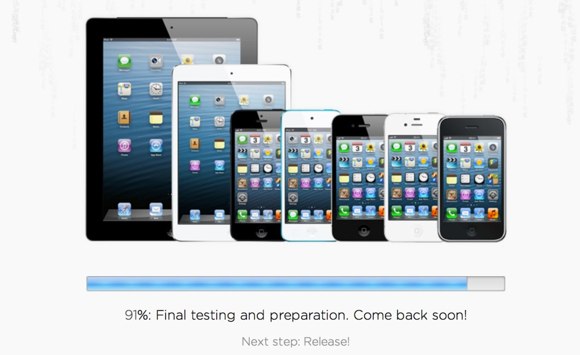 I think the objective was to release it on Sunday but as we all know that it is not easy to test the jailbreak on so many idevices and iOS firmware combinations.

We didn’t change any release dates. It’s silly to try to find “hints” from day 1… when we have no idea when we’re going to be done.

Yes, tomorrow is a concrete release date. It’s also the only release date we’ve ever given. :P

We request all the readers and iOS users to show little more patience instead of getting angry or annoyed. After all they are doing this stuff for us and they won’t charge us for this work. Every jailbreak that any iPhone dev group delivers to the community is free and will remain free. If you see any untethered jailbreak for which you have to pay is totally fake or is copied to make money.