A while ago Microsoft released first major update called “NoDo” for Windows Phone 7 users but many users were not getting it due to slow roll-out. At that time users used Windows Phone 7 updater created by Chris Walsh to get an early update on their devices.

So when Microsoft released Security Update, the phones which were updated by Walsh updater were throwing  a specific error code “80180048”. To resolve this issue and to make the update process smooth Chris Walsh has released another tool named as Walshed Phone Support Tool. 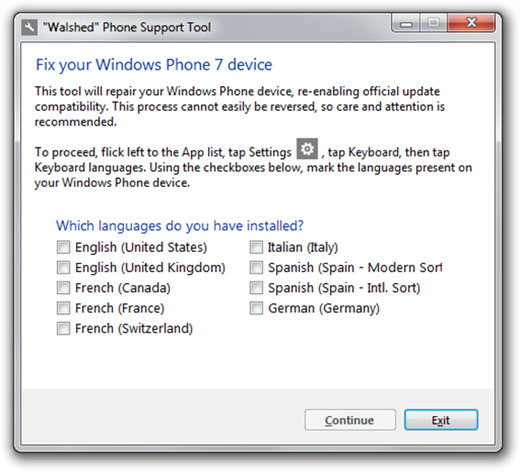 As screenshot shows, you just need to CAREFULLY select the right languages installed on your phone, and click “Continue”.  This will REPAIR your “Walshed” phone and put you back on the official update path.

Again, make sure you select ONLY the languages installed onto your device.  Once completed, try and update via zune, if it prompts you to update to 7392, great, if it doesn’t,  It means that update isn’t available for you just yet as your carrier hasn’t approved it.