Yesterday Microsoft rolled out a small update to Windows Phone 7 devices. The main purpose of this update was to make the ground for first major WP7 OS (firmware) update, codenamed “NoDo” which is to be released in early March.

However after applying the update many users, esp those having Samsung WP7 phones, reported that their devices had gone into unusable state.

Bricked devices instruct them to connect the phone to a PC, but connecting the device to PC and even hard-resetting does not appear to solve the problem.

Microsoft is already aware of this problem and is instructing the users not to update the device until a new update is pushed, which is rumored to be released within next few days.

How to Fix the Bricked Windows Phone 7?

In case you have applied the update and now your device is not responding at all, you can try this handy guide posted by a user at Neowin forum.

Even after following the above mentioned tips your device is not getting life, you can return your phone to stores to get it exchanged as suggested by Windows Phone Support team over twitter. 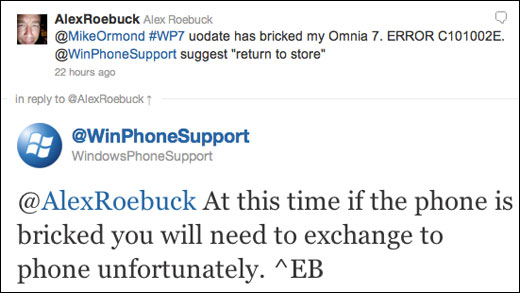 WinPhoneSupport: @AlexRoebuck At this time if the phone is bricked you will need to exchange to phone unfortunately.