It seems that Geohot, the discoverer and developer of many iPhone OS exploits and jailbreak tools, might be doing another come back, this time with untethered jailbreak for iOS 4.2.1.

If you remember when Chronic Dev Team was working on SHAtter exploit to develop jailbreak tool for iOS 4.1, Geohot made his unexpected entry with limera1n exploit which was used to develop limera1n and greenpoison jailbreaks for iOS 4.1 and beyond.

According to MuscleNerd’s reply to a users over twitter, Geohot has untethered iOS 4.2.1 jailbreak but for certain devices. 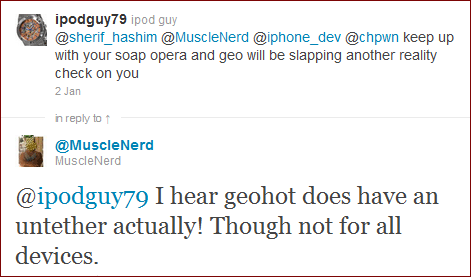 MuscleNerd: @ipodguy79 I hear geohot does have an untether actually! Though not for all devices.

Obviously we don’t know whether he will release a new jailbreak software (Rubyra1n ?) based on new exploit or he will update Limera1n using some kernel modifications or any other techniques.

There are also chances that he might delay the next jailbreak until iOS 4.3 is released.

Stay tuned to this blog for more information about Geohot’s untethered jailbreak for iOS 4.2.1/iOS 4.3. You can also join our Facebook fanpage or follow us on Twitter for latest updates.