Apple has blocked the hole in iOS 5 beta 2 that was being used to operate Gevey SIM. Up to iOS 5 beta 1 the interposer hole was present due to which Gevey SIM was working on iPhone 4, iPhone 3GS and iPhone 3G regardless what baseband (modem firmware) the device had.

Gevey SIM was a boon to those users who are not on official carrier operators to which their iPhones are locked. These days two types of Gevey SIM are available: one which requires dialing 112 emergency number and one (Ultra Gevey SIM) which doesn’t require such dialing. 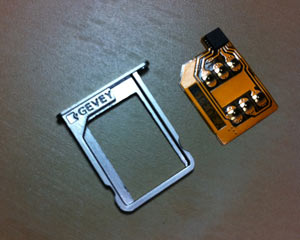 We are receiving confirmations from our readers that the SIMs which require 112 dialing are not working. There are no news yet whether Gevey SIM Ultra are also not working or they can still support the latest iOS 5 beta 2.

Update: MuscleNed has also confirmed through his twitter account that Gevey interposer hole has been closed in iOS 5 beta 2. It also indicates that none of Gevey SIM will work on the final iOS 5 release until and unless Gevey SIM developers come up with another way to activate iPhone.

So all those users who rely on unlock and use Gevey SIM to activate their iPhones should not update their idevices to iOS 5 until iPhone Dev Team or any other team releases a new way to use SIM cards of unofficial carrier operators.

Stay tuned to this site for more information on iPhone jailbreaking and unlocking. You can follow us on Twitter or join our Facebook fanpage to keep yourself updated on all the latest from Apple.