Google has finally started rolling out what they talked about at Google I/O, 2011 and that is Gmail Offline, Docs Offline and Calendar Offline. At the annual conference 2011 when the Mountain View company announced Google Chromebooks, they also told us about offline web apps. Gmail Offline will be available for most of users today while Docs Offline and Calendar Offline’s rolling out will be completed by next week.

For those who are not following the updates, the main question arises what does mean by Offline and what benefits we can get with this service. 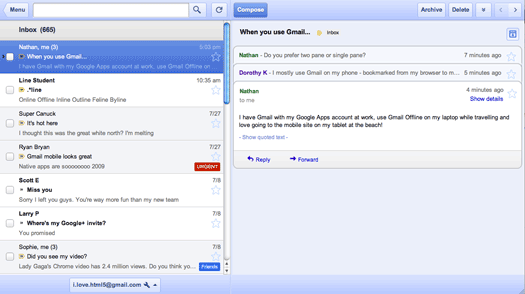 Gmail Offline means that we will be able to access our emails when there is no internet connection. We can read received emails. write a reply and save it in drafts. We can also organize our mails. And when we re-connect with internet, we can send the drafts to recipients.

Docs offline is not fully supported at this moment. With this service you can only view and read the documents but can not edit them. However, Google has declared its intention that the full access will be provided later this year.

You can read the more details about this new “Offline” feature on the Google’s Gmail Blog.