Google is sending out invitations to top Tech bloggers for its December 7th Chrome Event. Though it is not mentioned in the mails what will be revealed in the event, but our guess is that this will mark the public debut of much-anticipated Chrome Store.

However engadget states that the event will be used to announce Chrome OS based netbooks. Of course,  Google could announce the arrivals of both hardware and software, netbooks and store, in this event. 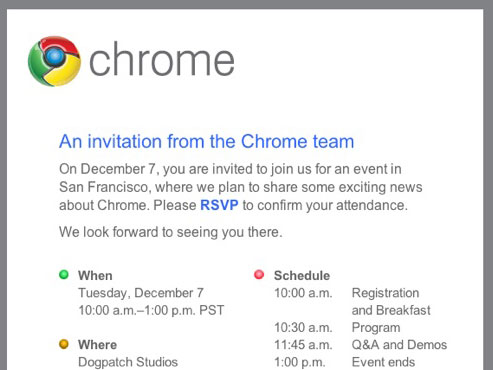 Of course, this all lines up with TechCrunch‘s report that Google will be launching its Chrome Web / App Store very soon, as well as yesterday’s launch of Chrome 8, which supports those aforementioned Chrome apps. (Companies like TweetDeck have already started demoing their browser apps.)

Don’t forget that those apps are going to be a large part of the OS, so it would make sense for Google to talk about ’em in tandem. The pieces sure do seem to be fitting together quite well, and while we still have lots of unanswered questions, we’re feeling confident that we’ll be getting some official answers on all this Chrome-ness very soon.

Stay tuned to this site for more information as they happen. You can also follow us on Twitter or join us on Facebook to get the latest updates.