This news is really interesting and exciting for all iPhone, iPod and iPad lovers. pod2g has finally confirmed that new jailbreak for iOS 4.1 is coming soon. In his tweet published few hours ago he confirmed that GreenPoisOn jailbreak worked well on iPhone 4. 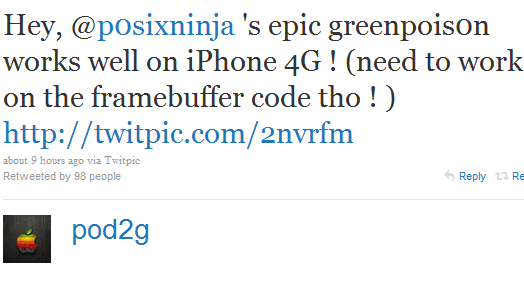 It is to remind you that GreenPois0n is the same jaibreaking tool which was developed for iPad by p0sixninja but it was never released. This GreenPoison jailbreak tool will be used along with new SHAtter exploit to develop an updated jailbreaking method for iOS 4.1. Now we can expect an early release of iOS 4.1 jailbreak as Will Strafach points:

remember when we said greenpois0n would come to use later as a toolkit? using it to create this jailbreak is cutting our workload in half (or maybe more). that’s why pod mentioned it.