Chronic Dev Team has released Greenpoison RC4 with iPod Touch 2G jailbreak support as promised and now iPhone 4, iPod Touch 4G/3G/2G, iPad and iPhone 3GS users can use Greenpoison to jailbreak their idevices on latest iOS 4.1 firmware and beyond.

But there is also a good news for iPhone 3G users who want to use this simple jailbreak tool. p0sixninja, the key member of Chronic Dev Team, just replied to an iPhone user that Greenpoison RC 5 might bring iPhone 3G jailbreak support. 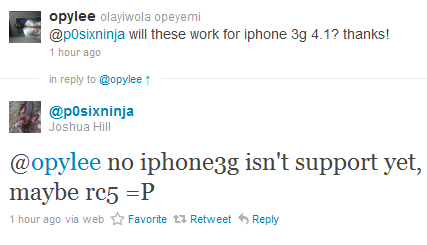 opylee: @p0sixninja will these work for iphone 3g 4.1? thanks!

Though Redsnow is also available for both Windows and Mac users to jailbreak iPhone 3G but Greenpoison jailbreak is quick, less time-consuming,  and supports all iOS versions and moreover it doesn’t require a pre-jailbroken device on previous iOS version to work.

Lets see how much time Chronic Dev Team takes to release the next RC5 version. Meanwhile, give a try to Redsnow for iPhone 3G jailbreak and stay tuned to this site for more information on jailbreak and unlock.