MapLocker allows you to save the Google Maps tiles between the runs and it prevents the deletion of Maps cache.

Without wasting the time of some readers I want to make it clear in the beginning that the solution which I am going to share in the next few paragraphs is not perfect and moreover it is for jailbroken iPhone. If your device is not jailbroken, you can use Nokia Here.

When Nokia Here Maps App was announced, we all were really happy because they were going to offer us a well-demanding feature “Offline Maps”. But when they released it and I downloaded it on my iPHone, I was really disappointed due to low quality Maps esp for the city which I visit few times a month. In this image you can find the clear difference between Nokia Here and Google Maps:

Then I came across a new Cydia tweak called MapLocker. MapLocer disables the cache-deletion ability of Google Maps. It keeps stored all the map tiles you visit on Maps application.

You can lock and unlock the cache from deletions through the Settings application.

The advantage of MapLocker over Here is it allows us to store the tiles cache for Hybrid Maps as well.

The disadvantage of this tweak is less cache capacity. In fact Apple provides 22MB cache for Google Maps and when the cache limit reaches near to this point, the existing cache is replaced with the new data. However, you can increase this limit by modifying the MapTile.sqlitedb file. Nick has written a nice tutorial for this purpose.

MapLocker also provides us a toggle under Settings.app to delete the existing saved tiles any time. 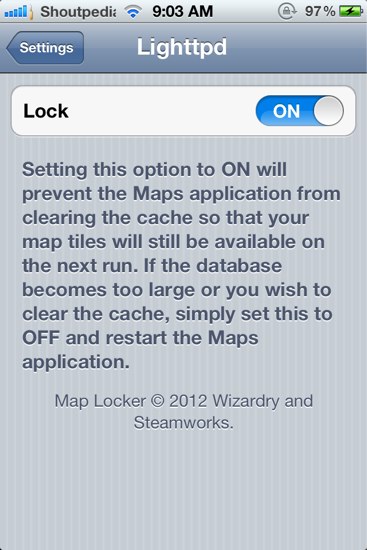 This is very little tweak and I’ll recommend all our readers to install it even if you don’t want to save Maps tiles. In fact it will save few bytes for some other purpose.