Long wait of Mac users for iREB is finally over. Now you can get this software on your PC provided you are running OS X 10.4 or above. However, unlike Windows version it performs only one function and that is to install the limera1n exploit on your supported device running on supported iOS.

What is its Purpose?

The main purpose of iREB is to allow us to install the custom iOS firmware. Custom firmwares are those iPSW files which we modify and add some additional files according to our need. But when we restore this custom firmware on our iPhone, it gives errors. iREB suppresses any such errors and lets us install the modified iPSW just like original stock firmware. The Mac version of iREB only supports this functions. Recovery Loop fix and SHSH grabbing functions are still not added in it.

Download the latest version of  iREB for Mac on your local machine, extract it but don’t open it yet. First we’ll have to put our device into simple DFU mode which is not an easy process if you are not an experienced jailbreaker. But if you already know how to do, just go to use. Otherwise read these few more lines.

Connect your device with the system using a USB cable. Shut down your device. Now follow these steps to achieve the DFU mode.

Once you are in DFU mode, open iREB app which will detect the device and patch it with Limera1n exploit. You see the following screen once done. 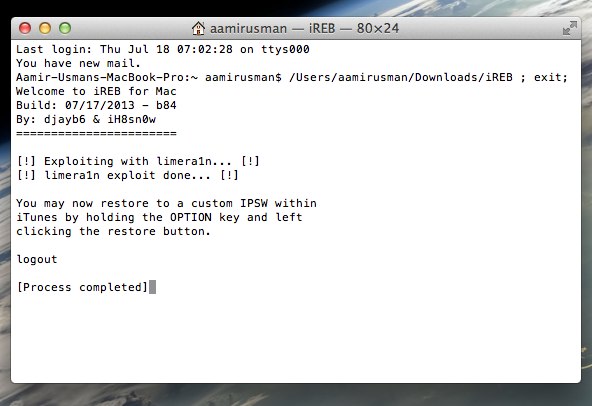 But if your device is not in DFU mode, it will tell you that it is waiting for the device to be in DFU mode as shown in the screenhot below. 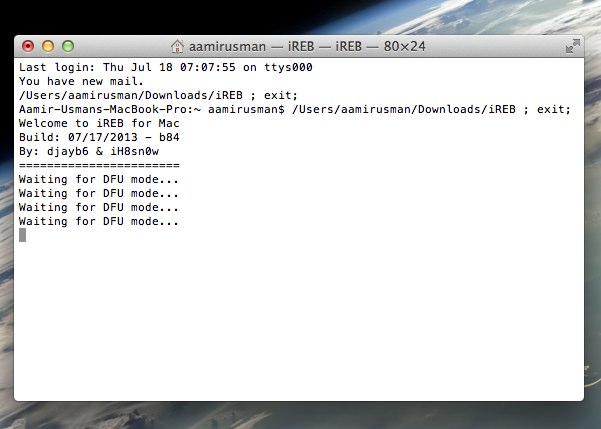 In this case you’ll have perform the above steps again. It might take few attempts to achieve the desired state. After you are in Pwned DFU mode, open iTunes and restore the custom firmware on your device. Don’t disconnect your device from the PC, otherwise your device will reboot out of the DFU mode.