Well folks, there is new jailbreak tool in the town with the name of Unthredera1n developed by a new team “UnthreadedJB”. Many popular researchers have confirmed that it actually works on specific device and iOS verson. They also mentioned on their website and even through their twitter account several times that they are not fakers. 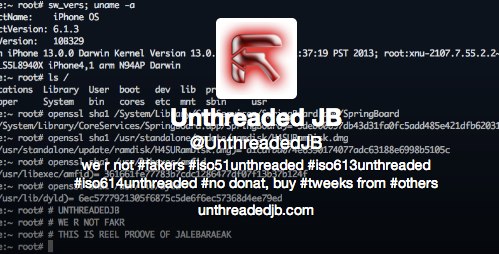 Here are two tweets to confirm its functionality:

I can confirm @UnthreadedJB works on Linux to jailbreak iPhone 4 CDMA, iOS 5.1. Not sure happy my dad will be I used his phone, but yolo

It’s for iPhone 4 CDMA… iOS 5.1 of all things, but it’s truly novel in its implementation.

You can also see this video posted by the UnthreadedJB team showing how Unthredera1n works on iPhone 4.

This new tool, on the other hand, is very limited in its usage. Only a small proportion of iOS users will get benefit out of it due to three limitations. The first one is that it works only iPhone 4 CDMA version which is sold only in the USA. The second is that it can jailbreak only iOS 5.1 version and third one is that it works on native linux operating system.

So, after reading till now you may have concluded that there would be only 30-50 people who own iPhone 4 CDMA running on iOS 5.1 and have access to native Linux operating system. However, they also say that they will release it for Windows and Mac OS soon.

If you are one of those luckiest person who fulfil all the above mentioned requirements, you can download and follow these instructions to jailbreak your device.

Step 2: Open the terminal and run the following commands

If you are running Ubuntu, you may get error with payload/payload directory. To solve this run this command:

After the device reboots, you will see the new icon of Cydia on the homescreen of your iPhone.