As promised back in November, the Taiwanese based HTC company has started rolling out Android 4.4.2 KitKat for HTC One. Initially the update is released for Europe only, and both unlocked and carrier locked devices are included in this stage. Once the release reaches your carrier/region, you’ll see a new system update. But if you have just checked it manually but still couldn’t find it, don’t get irritated as the roll-out is in early phase and it will take time to reach your phone. 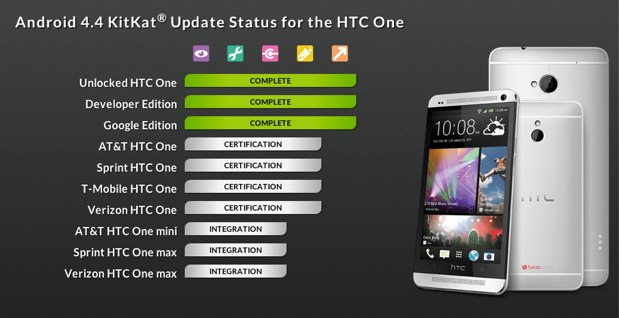 The countries of Asia and America contents are still in the waiting list. HTC has already submitted the update for certification and soon these countries will also get it, most probably till the end of next month.

The software version 4.19.401.8 Android 4.4.2 is of 308MB size. Besides the security fixes, it also adds support for cloud printing and Bluetooth profiles, just like the other KitKat versions. Moreover, the flash support in the native browser has been dropped. Android has already abandoned Adobe’s Flash but HTC was still providing the flash player in its HTC One handsets. 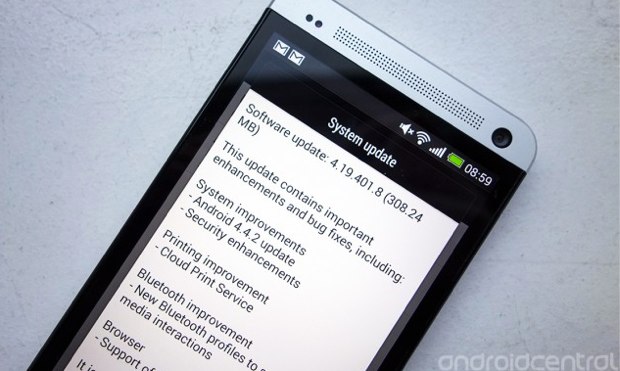 Android 4.4.2 for HTC One also includes HTC Sense 5.5. We will inform you what has been changed in it, but what we have come to know is that now battery icon is white on white background, like the official Kitkat. In the previous versions it was coloured.

If you device is eligible for the update, you can also install Kitkat 4.4.2 manually using HTC Sync Manager. But be warned, all the data and content would be erased if you go for manual update process. The OTA (Over the Air) method of update won’t delete any of your content. Only system files will be replaced with the new ones.