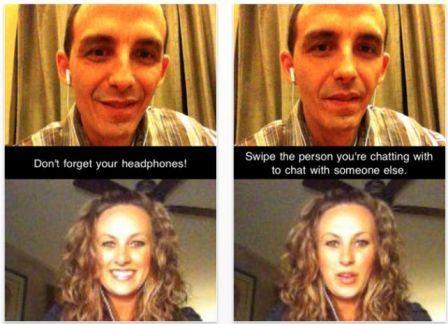 Finally Apple removes the iChatr app from its App Store as Apple always wants to keep the Store more or less family-friendly. You can image the situation what happened when a lot of people called in to say that they were exposed to a random (in some cases to a naked) person due to this iChatr app in the Store. So, the Apple pulled the app.

The principle of iChatr app is very simple. You make a random video conference with a stranger and you can either stick with the person provided or you can jump to the next person if you don’t like to chat with the first one.

Here is what the developer told to 148apps:

“The iChatr application has currently been removed from the App Store due to reports of a number of users exposing themselves during the random video chat sessions. We are currently discussing possible solutions to the problem with Apple.”

The app got a lot of buzz due to iPhone 4 which has got front facing camera with retina display. To share with you here are some random comments from its users:

I just loved it. I knew how to swipe past someone I didn’t want to engage with. I had some terrific talks and terrific times. I really thought it would sell a lot of phones. I hope they can work it out somehow.

Here is another comment from a person who is very angry after Apple pulled the app:

On the other side a lot of people are in favor of this decision.

I tried IChatr for 15 minutes. Has two interesting random conversations and saw 4 wangs and a pair of breasts. My conclusion: you cannot use iChatr without being “exposed”.

I think Apple is taking a reasonable approach: pull the app and start a dialog with the developer to find a solution. Not a bad approach.

So what do you think about this removal of iChatr?? We are waiting for your comments.