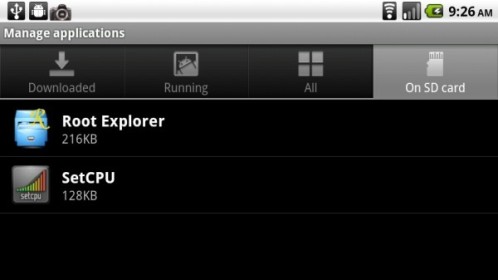 Why I like Symbian? In symbian based mobile phones when you install an app or game, you are asked about the storage location. You can select either phone memory or you can install all your apps on SD Card to save the space of phone for other functions. But android’s new version is one step ahead now.

In android 2.2 aka froyo you can move the installed apps and games from phone to memory card and vice verse. Ah! Symbian phones won’t allow you to move your apps/games from one location to another.

Tip: What are other features in android 2.2 (Froyo)?

Currently few android apps, which support latest Froyo, can be moved between two storage spaces but more apps will be updated soon as soon as the developers get used to new android version 2.2.

Follow these simple steps to move / to know whether the app can be moved or not.

C. Now tap on “On SD Card” to know whether your app has been moved or not.

You can also move back the app to phone memory by tapping on application and then selecting “Move to Phone” option.

Another Good Post: How to Move contacts from Windows to Android phone like Nexus One, Droid etc?