iOS 4.2 Release has been postponed due to a bug found in the iOS GM (gold master) build. The bug is related with WiFi connection on iPad.

During the testing of iOS 4.2 GM the developers found that the iPad connects to WiFi successfully but the connection is lost after few minutes. Some users have reported that the same problem is also happening with iPhone 4. 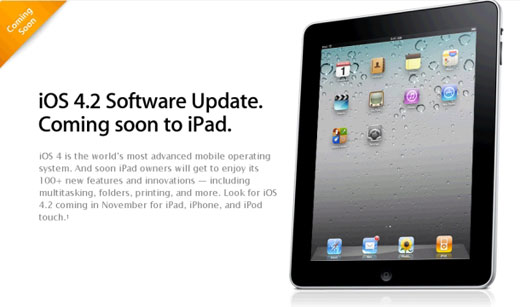 According to MacStories‘ sources the iOS 4.2 is delayed for one more week:

Wifi issues came up with the GM build Apple released on November 1st. From what we’re hearing, Apple may release a second GM build as early as tomorrow to deal with WiFi issues. This will delay the release for at least a week while it is tested, but may not get public release until the following week as it appears Apple will be testing it vigorously. iOS 4.2 should, however, come out before Thanksgiving.

Another reliable site 9to5mac reports that November 16th is the actual date of iOS 4.2 Final Version.

Though many users are anxiously waiting for this release but this delay is also a golden chance for those who have not saved the SHSH Blobs for iOS 4.1.