MuscleNerd, the key member of iPhone Dev Team, re-confirms the news that untethered jailbreak for iOS 4.2.1 on iPhone 4 will be released by Christmas.

Earlier Comex, the developer behind Spirit and JailbreakMe tools has confirmed the arrival of iOS 4.2.1 untethered jailbreak on all idevices, including iPhone 4 and iPhone 3GS New bootrom, to be released on Christmas.

MuscleNerd’s reply over twitter indicates that the work is on track. PS: The tweet has been deleted now. 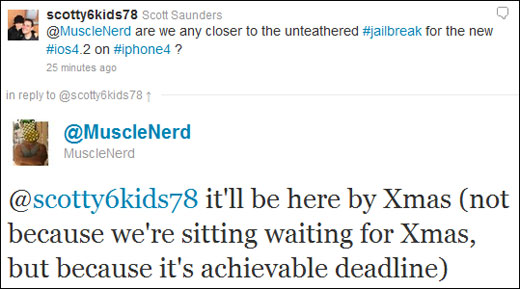 scotty6kids78: @MuscleNerd are we any closer to the untethered #jailbreak for the new #ios4.2 on #iphone4 ?

MuscleNerd: @scotty6kids78 it’ll be here by Xmas (not because we’re sitting waiting for Xmas, but because it’s achievable deadline)

Stay tuned to this site for more updates on iOS 4.2.1 jailbreak. You can also follow us on Twitter or join us on Facebook Fanpage to get the instant updates.