In the beginning of this week BGR reported that iOS 4.3.1 would be released within next 1- 2 weeks and today they have provided a proof of iOS 4.3.1 by showing the screenshot of “About” page from an iPhone on which iOS 4.3.1 is installed.

BGR claims that one of their sources in Apple installed the unreleased and unseen iOS 4.3.1 on one of their iPhone. 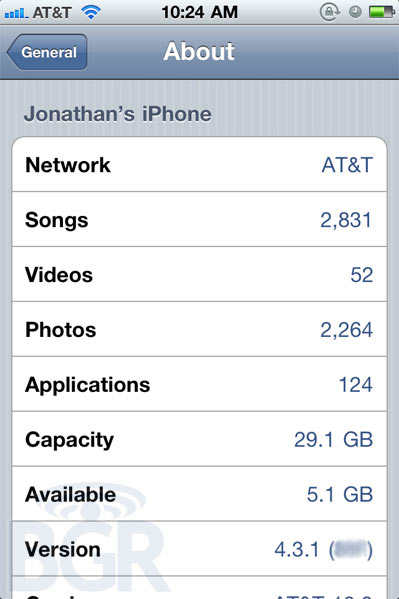 One of our Apple connects just installed the unreleased and unseen iOS 4.3.1 build on one of our iPhones, and we’ve been playing around with it for a couple days. We reported the changes from iOS 4.3 a few days back, and it really does look as if iOS 4.3.1 will simply fix bugs, hence the version numbering. Battery life seems a tad bit better, though that’s not scientific at all. Our source says we should continue to expect iOS 4.3.1 in the next 1-2 weeks, just as we previously reported.

Reportedly iOS 4.3.1 will fix the bugs found in current iOS 4.3 version esp the battery drainage issue and the hole that led hackers to develop iOS 4.3 jailbreak for iPad 2.

The complete changelog is here (unofficial):

Tip: The official changelog for iOS 4.3 can be found in this post.

We will keep you updated on this new release as we have been doing in the past. You can also get the instant updates through our Twitter and Facebook accounts.