BGR has already reported that iOS 4.3.2 will be released in next two weeks but today they have managed to download the unreleased iOS 4.3.2 and restore it to iPhone 4.

So far three important fixes are observed in it. It will fix the issues related to Verizon iPad 2, FaceTime and WebKit vulnerabilities. 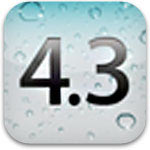 One of our Apple sources has just let us know that Apple’s iOS 4.3.2, due within the next week or so, will fix the issues we’ve been hearing about with some Verizon iPad 2 models. Additionally, the new update is said to contain a fix for FaceTime in addition to security fixes for things like WebKit vulnerabilities and other minor changes. We’ve loaded up iOS 4.3.2 on our iPhone, and we’ll let you know if we notice any other changes.

It is yet to be confirmed whether iOS 4.3.2 will also include a patch for @i0nic’s exploit which is used in the latest iOS 4.3.1 untethered jailbreak.

All jailbreakers and unlockers are suggested to save the SHSH blobs for iOS 4.3.1 so that they can restore to iOS 4.3.1 any time after updating their devices to iOS 4.3.2. [via BGR]