If you are following the updates from Apple, you must know that Apple released iOS 5 beta 6 last Friday for developers. Developers are those users who have purchased the membership of Apple’s Developer Program which costs $99 per year and who can download the beta releases and install them on their devices. However if you don’t have membership but the UDID of your device is registered with Apple, you can install the beta version on your iPhone after downloading it from some sharing sites. In case, niether you are a developer and nor the UDID of your iDevice is registered with Apple, you can even then install the beta relase on your device and bypass the UDID check using the recently released Sn0wbreeze 2.8 beta 6.

Anyways, we don’t recommend our readers to use any illegal way to get iOS beta 6 on their idevices. In fact you should wait for the final and public build of iOS 5 which is around the corner. The today’s release of Redsn0w 0.9.8 beta 6 is meant for the developers of jailbreak apps who also have a legal account with Apple’s Developer Program.

Redsn0w 0.9.8 beta is available for both Windows and Mac environments. Here are the download links. 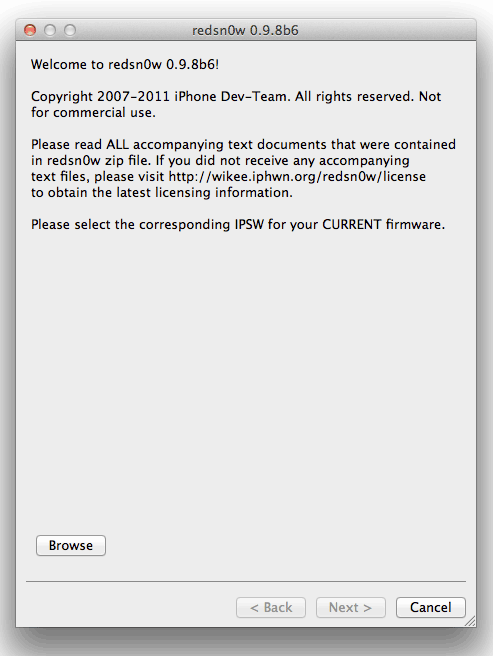 Before launching this app to jailbreak iOS 5 beta 6, read this warning note from iPhone Dev Team:

Update #6: We’ve released redsn0w 0.9.8b6 to jailbreak iOS5 beta6 (point it directly at the beta6 IPSW).  Two important notes about this version: (1) Please let your device boot normally to IOS5b6 and do a clean shutdown (slide to power off) before jailbreaking.  (2) Boot logos have intentionally been disabled for now, so you’ll see a black screen on tethered boots (you can re-enable logos or verbose boot with command-line options if you really want them back).

Due increased sensitivity to abrupt filesystem shutdowns in IOS5b6, it’s very important that you do a clean shutdown before running redsn0w.