This is the first time Apple is releasing so many beta versions of its upcoming iOS 5 firmware for iPhone, iPad and iPod Touch devices. iOS 5 beta 7 has just been seeded to developers. The main reason behind releasing 7 beta versions might be the testing of full compatibility of iOS 5 with iCloud and the testing of successful over the air updates before the release of public build. 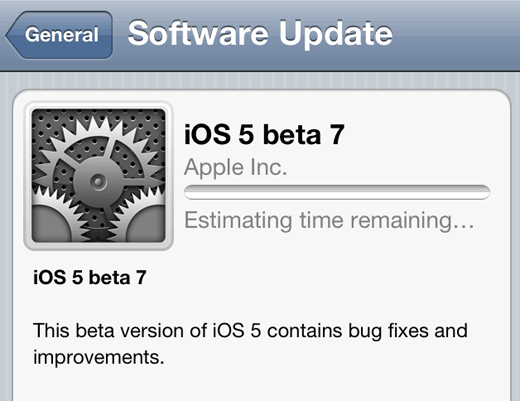 iOS 5 will be released this fall. It is the next major version of iOS containing many new features like Notification center, iMessage, iCloud integration, Twitter integration, Newsstand and son on.

Here is the full changelog.

iOS 5 beta 7 can be downloaded from Apple’s Developers Program. Only those users can get this release who have already purchased the membership. For other users we will try to get the direct download links of iOS 5 beta 7 hosted on some third-party file hosting sites.