Along with iOS 7.0.6, Apple has also released iOS 6.1.6 for little older devices, that are iPhone 3GS and iPod Touch 4G. The support documents show that the changes in both these version are similar. It seems it contains a crucial security fix for iOS users. 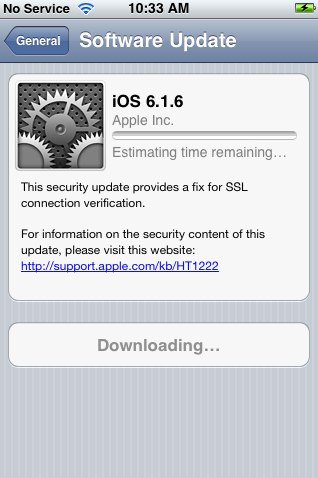 Impact: An attacker with a privileged network position may capture or modify data in sessions protected by SSL/TLS

Description: Secure Transport failed to validate the authenticity of the connection. This issue was addressed by restoring missing validation steps.

If you are concerned about security, you can update your device to this version as soon as possible but you won’t be able to jailbreak it with the existing p0sixspwn version. However, one of key developers, winocm has confirmed on twitter that today’s release doesn’t fix the exploits used in p0sixspwn. The jailbreak needs an upgrade, though, which might be release soon.

Actually, correction, 6.1.6 doesn’t fix any bugs as far as I know, so, go ahead and update.