Erica Joy has finally confirmed through her Google+ account that Google has already submitted its Google+ app for iOS idevices i.e., iPhone, iPad and iPod Touch devices. The app was submitted to Apple for approval soon after the opening of Google+ for field trial.

Google+ iOS app will be available with global support, meaning only one app will be released for all iOS models including iPad 1 and iPad 2. Apart from browser based versions the only other OS (operating system) for which Google+ app is available so far is android, which is Google’s own operating system for smartphones and tablets. 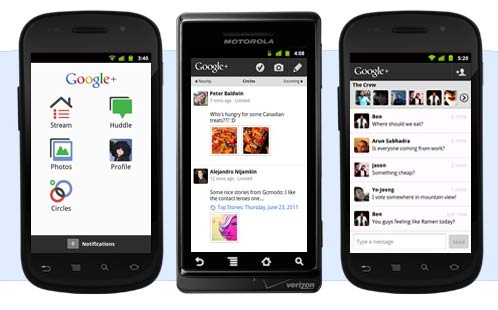 Google+ app for androids has already received 800,000 – 1000,000 downloads and above it positive response from android users.  From these stats it looks like Apple’s App Store will get more than 100,000 hits within first hour of Google+ app’s release for iOS devices.

Google+ app for smartphones and tablets also brings another cool feature called “huddles” which lets users start a group chat just like iMessaging in iOS 5. Moreover, you can also upload images and videos directly from your device to your Google Plus account.

Google+ is still under field testing and only those who have managed to get invites from their friends can enjoy its awesome features. Due to its growing popularity Google has stopped the invites for some time to remove the existing bugs and to introduce more features in it before it is opened for masses.