Wal-Mart is going to sell iPad from next week and 1000 stores will be ready to deliver the iPad by the end of this month. The rumors were already floating around the web that Wal-Mart was going to offer iPad for sale in its US retail stores later this year but the changes are taking place rapidly and now you won’t need to wait longer. 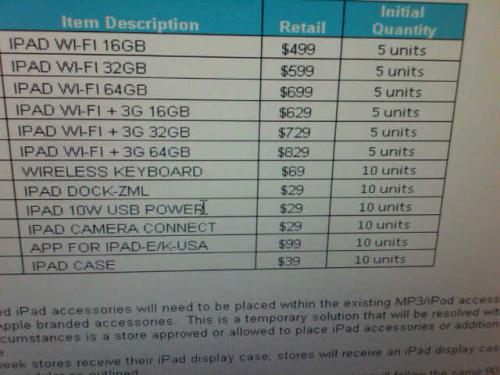 According to the MacRumors:

We’ve received another photo of a portion of the notice, which reveals that Wal-Mart will be rolling out iPad availability beginning next week to 1,000 stores by the end of October, with more stores being added in early November. We’ve been told that Wal-Mart’s plans call for a total of 800 stores to be added in November.

In a potential answer to that speculation, we’ve received word that Wal-Mart sent an email to its store managers today outlining the iPad models and related accessories that should be making their way to store shelves in the near future. According to this partial photo of the alleged email sent to us, Wal-Mart plans to offer all six models of the iPad, with initial stock of just five units per model for this location. In addition, a number of standard accessories, as well as AppleCare, will be also be offered.

On every store a live demo unit will also be place that will include a video presentation of the iPad’s features.