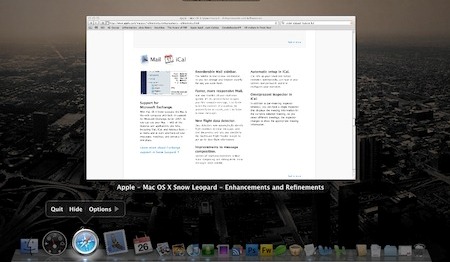 Finally Apple has decided to give the most wanted features to its iPhone users and it is multitasking. If you are phone geek, you know that symbian and android mobiles already have this option.

Multitasking is one of the top missing features in current iPhone OS and due to this reason many phone users don’t like iPhone.

The upcoming iPhone 4.0 OS will provide the multitasking features in Expose-like style. If you have used Mac you will be familiar with this type of multitasking. But due to less memory resources in iPhone, this style will not be completely similar to desktop version. It will rather display only icons of the apps as you see in new Symbian^1 phones.

This feature will be accessible by tapping on Home Screen. In symbian phones, however, you bring up the running apps by keeping pressed the menu key.

As you know the current version of iPhone OS doesn’t support multitasking except some Apple apps can be used in this fashion. And on the other hand Jailbroken phone can be customized to experience this feature but not upto satisfaction level.

It’s time to celebrate by all iPhone users :)