Folks! we have got something new to share with those readers of Shoutpedia who are anxiously waiting for iPhone 4 unlock on baseband 03.10.01 and baseband 02.10.04.

MuscleNerd, the key member of iPhone Dev Team and the developer of Ultrasn0w unlock, has just shared his plan for iPhone 4 unlock through his twitter account.

He confirms that the upcoming iOS version, that is iOS 4.3, also contains some vulnerable commands and he is working to find a way to make it unlockable. 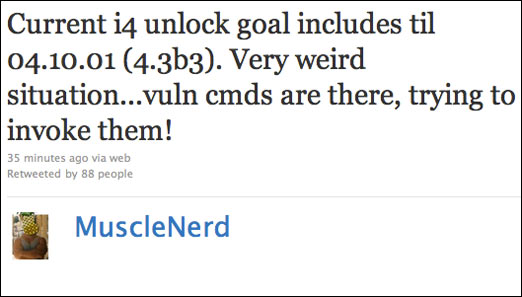 MuscleNerd: Current i4 unlock goal includes til 04.10.01 (4.3b3). Very weird situation…vuln cmds are there, trying to invoke them!

MuscleNerd has already made it clear that iPhone 4 unlock on iOS 4.2.1 will be released after iOS 4.3 is out. After this tweet, it has been confirmed now that the iPhone Dev Team is not releasing Ultrasn0w 1.3 because they  want to include iOS 4.3 baseband 04.10.04 unlock support in it as well.

Last week Sherif Hashim, who is also a member of iPhone Dev Team and works on iPhone Unlocks, disclosed while replying to a user’s tweet that he had found a working exploit to unlock iPhone 4 on baseband 03.10.01 and 02.10.04.

It seems iPhone Dev Team is waiting for iOS 4.3 public version to release the iPhone 4 unlock so that Apple does not patch the holes in the final build of iOS 4.3.

Stay tuned to this blog for more information on iOS 4.3 Unlock.