After years of speculations, finally Verizon gets iPhone 4. Lowell McAdam, Verizon COO, confirms that iPhone 4 will be available early next month.

Our relationship with Apple has developed over the last two years. In 2008 we started talking about bringing the iPhone to a CDMA network. We spent a year testing. Late in 2010 we started offering the iPad… today, we are extremely gratified to announce that the iPhone 4 will be available early next month. 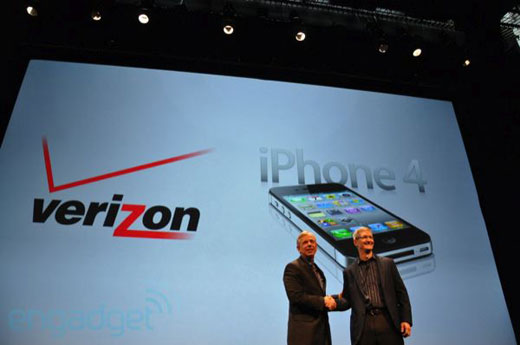 Here is the official press releas:

BASKING RIDGE, N.J. and CUPERTINO, Calif., Jan. 11, 2011 /PRNewswire/ — Verizon Wireless and Apple® today announced that the iPhone® 4 will be available on the Verizon Wireless network beginning on Thursday, February 10. Qualified Verizon Wireless customers will be given the exclusive opportunity to pre-order iPhone 4 online on February 3, ahead of general availability.

iPhone 4 is the most innovative phone in the world, featuring Apple’s stunning Retina(TM) display, the highest resolution display ever built into a phone resulting in super crisp text, images and video, and FaceTime®, which makes video calling a reality. iPhone 4 on Verizon Wireless will also include new Personal Hotspot capabilities allowing customers to use iPhone 4 to connect up to five Wi-Fi enabled devices.

“We are pleased to introduce millions of wireless users to the industry leading iPhone 4 on the nation’s most reliable network,” said Lowell McAdam, president and chief operating officer of Verizon. “This is an important step for the industry as two great companies join forces to give wireless customers one of the most important technological additions to the mobile landscape this century.”

“Verizon Wireless customers have told us they can’t wait to get their hands on iPhone 4, and we think they are going to love it,” said Tim Cook, Apple’s chief operating officer. “We have enormous respect for the company Verizon has built and the loyalty they have earned from their customers.”

iPhone 4 features a 5 megapixel camera with LED flash, HD video recording, Apple’s A4 chip, a 3-axis gyro and a beautiful glass and stainless steel design like no other mobile phone. iPhone 4 also comes with iOS 4, the world’s most advanced mobile operating system, which includes multitasking, folders, Game Center, AirPlay® and AirPrint wireless printing. iPhone 4 customers have access to the world’s most popular App Store(SM) with more than 300,000 apps available in an incredible range of 20 categories, including games, business, news, sports, health and reference.

iPhone 4 will be available on the Verizon Wireless network beginning Thursday, February 10 for a suggested retail price of $199.99 for the 16GB model and $299.99 for the 32GB model with a new two year customer agreement. iPhone 4 will be available at more than 2,000 Verizon Wireless Communications Stores nationwide, online at www.verizonwireless.com/iphone, at Apple Retail Stores, at the Apple Store® (www.apple.com), at Apple Authorized Resellers, and by calling 1-800-2 JOIN IN.

© 2011 Apple Inc. All rights reserved. Apple, the Apple logo, Mac, Mac OS, Macintosh, iPhone, Retina, FaceTime, AirPlay and Apple Store are trademarks of Apple. Other company and product names may be trademarks of their respective owners.

Stay tuned to this site for more information.