More and more rumors are emerging about the next generation iPhone 5 and iOS 5. First we got the news that iPhone 5 running on iOS 5 will support the real world multi-player games and here is another rumor according to which Apple has developed a new type of projection displays for iPhone 5.

According to a report by the Nikkei Business Publications, Apple is working on advanced projection-type capacitive touch panels that can sense insulators such as cloth ans plastic.

The current projection-type panels have largely replaced the resistive touch panels but they are capable of detecting only few objects. With new projection panels users could write, type and do other functions on the screen of iPhone 5 while wearing gloves. 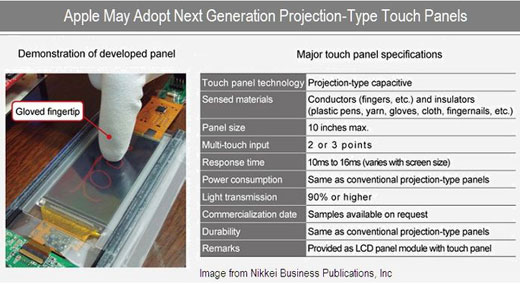 According to Patently Apple:

The new panels range from 3 to 10 inches in size, covering Apple’s current lines of iOS based devices. Considering that Apple is a pioneering leader in this field, we’re likely to see this technology come to iOS based devices in the coming years.

Stay tuned to Shoutpedia for more news about upcoming iOS 5 and iPhone 5.