iPhone 5 is yet to be announced but the news and rumors about iPhone 6 have begun circulating around the web town. Earlier today Verizon CFO  Fran Shammon told the media while answering a question that the next generation iPhone, that is iPhone 5, would be a global device, which means iPhone 5 will be capable of running on GSM networks (used by AT&T in the U.S.) and CDMA networks (used by Sprint and Verizon in the U.S.).

The teardown of Verizon iPhone 4 and iPad 2 performed by iFixit shows that these two devices carry a Qualcomm Gobi Chip, the MDM6600, making the devices capable of supporting both GSM and CDMA networks but Apple just hasn’t switched on that capability. That could be what Apple has to introduce in iPhone 5: a phone that can work anywhere with any network and with better speed. 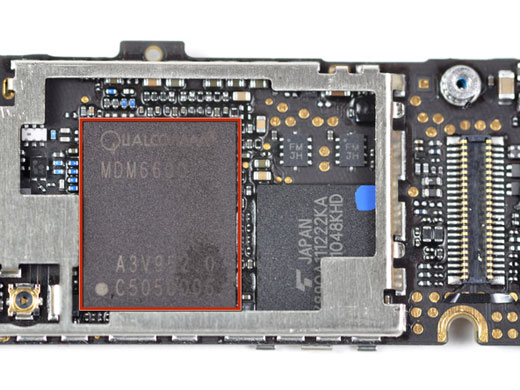 While answering questions about the future of LTE during its earnings call this week, Apple CFO Tim Cook said:

“The first generation of LTE chipsets force a lot of design compromises with the handset, and some of those we are just not willing to make.”

The Cell Phone Junkie decodes the above statement in this way;

Now, if the iPhone 5 won’t have LTE, will the iPhone 6?  Almost certainly.  For the timeline, we look back to Qualcomm.  The chipsets used in the iPhone 4 were announced over a year prior to the device’s actual release.  So if we think the iPhone 6 is coming in 2012, then we need to keep our eyes on what Qualcomm is doing now.  Back in February, Qualcomm unveiled it’s next generation of chipsets, including the MDM9615.  This chip will provide enhancements in modem performance, power consumption, board area and BOM expense, exactly what Apple is looking for in its devices.  The 9615 will support LTE (FDD and TDD), DC-HSPA+, EV-DO Rev-B and TD-SCDMA.

This baseband chip is likely to work side by side with what we will all know as the A6 processor.  The 9615 will be available in late 2011, perfect timing for Apple to start testing and ready them for production.

As usual no official comment or statement from any Apple man is on record regarding what and when will be introduced in which iPhone model.