More rumors about iPhone Nano are coming out and this time The Wall Street Journal’s Yukari Iwatani Kane, who is famous for being Apple’s choice for confirmed leaks, unveils more details.

She takes her time to confirm that Apple is working on a Mini iPhone 4 / iPhone Nano which will be half the size of current iPhone 4 to target the lower end of smartphone market. 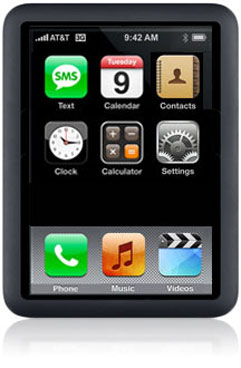 Apple also is exploring a major revamp of its MobileMe online storage service, the people familiar with the matter said. The service, which lets users store data in a central location and synchronize their calendars and contacts among computers and other devices, currently has an individual annual subscription fee of $99. Apple is considering making MobileMe a free service that would serve as a “locker” for personal memorabilia such as photos, music and videos, eliminating the need for devices to carry a lot of memory, the people familiar with the situation said.

One of the people, who saw a prototype of the phone late last year, said the device is intended for sale alongside Apple’s existing line. The new device would be about half the size of the iPhone 4, which is the current model.

The new phone would be available to carriers at about half the price of the main iPhone repertoire. That would allow carriers to subsidize most or all of the consumer’s cost, putting the iPhone in the same mass-market price range as rival smartphones, the person said. Apple currently sells iPhones to carriers for $625 apiece on average. With carrier subsidies, consumers can buy iPhones for as little as $199 with a two-year contract.

The post at WSJ has been updated with more details about iPhone Nano and new MobileMe Service.

The person who saw the prototype of the new iPhone said the device was significantly lighter than the iPhone 4 and had an edge-to-edge screen that could be manipulated by touch, as well as a virtual keyboard and voice-based navigation. The person said Apple, based in Cupertino, Calif., also plans to upgrade the iPhone 4.

The new MobileMe file-storage and music service could be available as early as June, depending on the progress of licensing talks that are in their preliminary stages, the people familiar with the situation said. Apple had planned for the service to be available a year earlier.