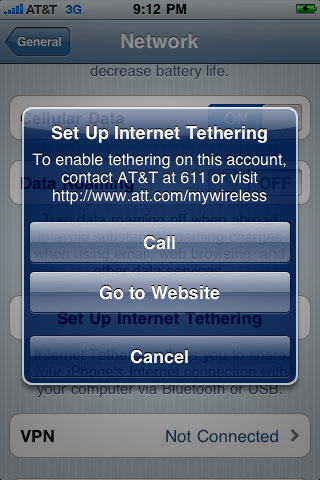 Today Apple has released a new beta version of its upcoming iPhone OS 4. In April iPhone OS 4 was announced and at that time tethering feature was not revealed.

According to Engadget the new iPhone OS  4 beta 4 includes AT&T tethering feature too. Apple has introduced this new feature to beat the tethering option found in andriod 2.2 aka Froyo.

Tethering allows your other devices like laptops, mobiles etc to connect with your iPhone to surf the net. So you can use the same plan on your multiple devices.

It is to be noted that new iPhone OS 4 can be jailbroken by using Redsn0w.

If you have access to Apple Developers Program Account, you can download this latest beta release. You will have to reset the network settings to enable the tethering after you update to iPhone OS 4 beta 4.