The ipswDownloader is a pretty nifty tool used by jailbreakers worldwide to easily download any version of iOS that one might wish to download. What makes it essential is the relative ease of use it offers and the simplification of the whole process of  firmware downloading. The ipswDownloader utility was recently ported to Windows as it was originally available for Mac OS X only. The same Windows version has been given a update and is now called as openIPSW. 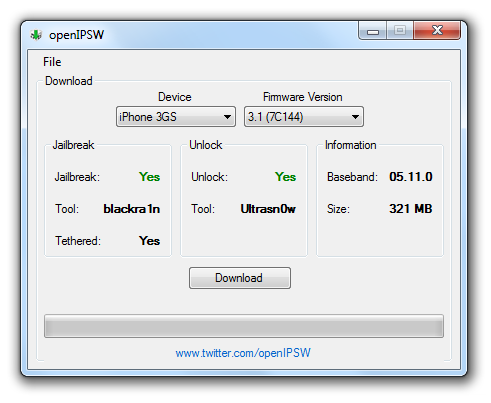 The update features pretty significant changes that have helped to improve the functionality of the utility. While originally the process to download iOS firmware versions was also simple, the ability to check for jailbreak and unlock availability of a particular iOS version was sorely missed. openIPSW gives us precisely that as jailbreak availability information relating to each iOS version along with their respective utilities is displayed to make the jailbreaking process even simplified.

Other significant changes that include in the update are:

For those who live under a rock and still don’t know what a jailbreak is and how to jailbreak their iPhone, iPad or iPod Touch, check out our simple and easy to understand jailbreaking tutorials and unleash the true potential of your devices.