Rumors about iPhone 5 are spreading around the globe from quite some time. Well, no one can say which rumor will turn into a real news and when but this one, which we are going to share in this post, seems to be getting more weightage due to previous rumors.

An image of iPhone 5’s front bezel is floating around the web which is claimed to be the part of original iPhone 5. 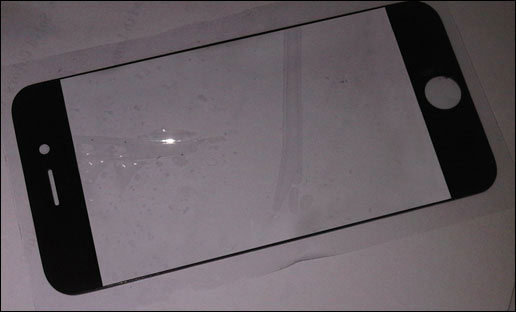 The image was first posted on idealschina and then on 9to5mac. The part’s design appears to be similar to that of the one found on the current iPhone 4 but the screen cutout appears to be much larger indicating a large screen of iPhone 5.

The purported iPhone digitizer (above) also appears to have a thinner bezel on all sides: right, left, top, and bottom. This matches up well with a well-sourced report claiming that the next smartphone from Apple will feature an edge-to-edge display. This would allow Apple to increase the display’s size, while keeping the actual device’s size the same or even smaller. Information about this rumored display’s resolution is yet to surface, but one concept pegs the rumored 4 inch display to stay “Retina” with the new bottom portion being a stationary control switch bar for iOS multitasking.

Though the exact measurements are not posted on any of the above mentioned sources, but it has been rumored in the recent past that Apple is working on large 4-inch screen-sized iPhone 5 which will be released in Summer 2011.

iPhone 5 is expected to feature 4-inch screen-size, and upgraded A4 processor, new Gobi WWAN chip already found in Verizon iPhone 4 and it will be designed to work on both GSM and CDMA networks.

Stay tuned to this site for more information on iPhone 5, iPad 2 and iOS 4.3.