About a week ago Apple released iOS 4.2 version for Apple TV 2G. And if you want to run third-party apps and plugins on Apple TV2 like nitoTV, GrooveShark Client and Plex Client, here is step by step guide to jailbreak the device on iOS 4.2 with PwnageTool.

The PwnageBundle which is being used in this guide to jailbreak ATV2 on iOS 4.2 is not from official sources but it works without any problem and is tested by @nitoTV, the developer behind popular nitoTV plugin.

This whole guide is taken from ReadMe file present in PwnageBundle folder because we couldn’t find a better way to explain all these steps. Very very special thanks to @nitoTV for this awesome guide! 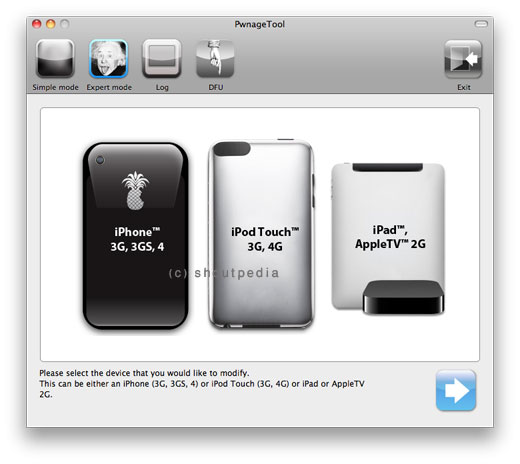 Disclaimer: If you do not have your SHSH blobs backed up for your AppleTV at 4.1 i HIGHLY advise avoiding any upgrading whatsoever, tethered or not, until a real proper jailbreak is available. If you don’t understand the above GO BACK NOW, do NOT attempt the following.

Made it this far? Another warning:

If you aren’t a developer or someone trying to tweak iOS 4.2 the following jailbreak is STRONGLY discouraged. Booting tethered on the AppleTV is an easy process, but it is still a PITA that a casual user would probably not have the desire to put up with. Read the ENTIRE documentation at least once before running through the process.

You will need a computer that is close enough to your AppleTV that it can be plugged into USB, power and HDMI without any major movement of the AppleTV itself), if you don’t meet this requirement the following is impossible, unless your microUSB cable is REALLY long.

Step 1. Move this entire folder to the desktop (only necessary if you are following these directions verbatim)

Step 2. Open Terminal app (if you don’t know where this is, you REALLY shouldn’t be doing this.

Step 3. run the following commands (this will fail if you didn’t move this folder to the desktop, PwnageTool almost MUST be in your /Applications folder)

Step 4. Run PwnageTool on the 4.2 ipsw (if you don’t know how to do this, again you REALLY shouldn’t be here) saving into the ~/Desktop/tethered folder with the default name PwnageTool gives it (AppleTV2,1_4.2_8C150_Custom_Restore.ipsw)

Step 5. back in the terminal run the following:

Step 6. Restore the AppleTV to the ~/Desktop/tethered/AppleTV2,1_4.2_8C150_Custom_Restore.ipsw firmware (your AppleTV SHOULD be in DFU mode after finishing up with PwnageTool)

NOTE: Do not install any packages through cydia in expert mode, this produced very unpredictable results.

Step 7. Unplug and then replug the USB, after the AppleTV has finished started up (will be blinking steadily), plug in the power cable

NOTE:  it will loop a complaint re: DFU mode, just ignore this, once you are finished getting in DFU mode tetheredboot will take over.

Step 9. MANUALLY put the AppleTV in DFU (*DO NOT USE PWNAGETOOL*)

No matching processes belonging to you were found

Device must be in DFU mode to continue

Checking if device is compatible with this jailbreak

Waiting 2 seconds for the device to pop up…

Waiting 10 seconds for the device to pop up…

Step 10. If all went well, unplug USB and plug in HDMI and your AppleTV should be ready to go. You will need to repeat 7-9 every time you restart your AppleTV, this isn’t a convenient process by any stretch!

Step 11. To get nitoTV installed ( i couldn’t get the cydia, or custompackage sot work in PT)

Note: The “Finder” app name changed from lowtide to AppleTV, this means any appliances installed through nitoTV or apt-get will not show up unless moved from /Applications/Lowtide.app/Appliances to /Applications/AppleTV.app/Appliances, we are working on a solution for this, hopefully it will be resolved in beigelist in the near future.